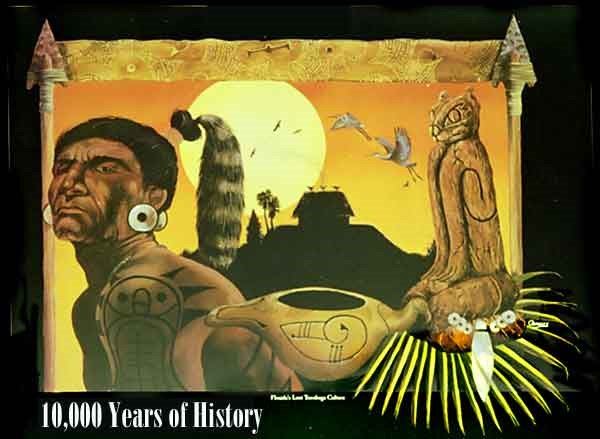 Locally, there is an old legend, whose origin has long been lost, that an elderly Indian Chief, whose tribe made the Ocala area its home, became very ill.  The Medicine Man finally decided old Chief Clica-Si was surely headed for the "Happy Hunting Ground" and as a last resort sent for the Chief's blood brother, Chief Nu-Wa.  Chief Nu-Wa knew of a wonderful healing spring several moons away, toward the setting sun, and soon the Chief's braves were carrying their old Chief in a litter toward the western water.

They came to a place, along a narrow stretch of water, whose banks were lined with huge travertine rocks.  Chief N-Wa  told the tribe that the spring was located on the sandy island that stretched in front of them.  The teepees were pitched on the rocky shore and canoes took them across to an island where the spring was soon found.  The Chief regained his health quickly after drinking the mineral waters and each year from then on, the tribe traveled to the rocks and the spring.

This is supposedly how Indian Rocks got its name, with the spring, capped years ago and now lost.

This is the legend, but a geodetic survey of 1828 shows a record of the old pass in the vicinity of the southern municipal limits of Indian Rocks Beach, South Shore.  This stretch was also filled with travertine rocks where it is said Indians were often found fishing.  The government filled the pass in 1927, joining the upper "Sand Key: to the lower beaches.

Indian Rocks Beach South Shore is one of the oldest and smallest beach communities and had the longest name.  It was originally an Indian campsite and got its name from the large red rocks found along the shoreline.

It first "settlers" were a pair of Robinson-Crusoe-type brothers named Cochran.

In 1883 four Cedar Key speculators sailing to St. Petersburg, stopped to explore the Island.  They were fascinated by the Island's possibilities for future development and bought it from the Cochran Brothers for a nominal sum.  It is said the brothers bartered their Island "for little more than a string of beads and $25.00, figuratively speaking, like the Indians of Manhattan."

The region soon became a popular residential and vacation area.  Many prominent Tampa residents built summer cottages on the Island, among them the D.B. McKays.  Members of the McKay family served intermittently as Mayor of Tampa and publishers of the Tampa Tribune.

Until a wooden turn bridge was built in 1916, a ferry boat transported pedestrians to the Island, and a barge carried horses, buggies and a few automobiles to the summer resort.

In 1905 the Railroad ran a spur line from the mainland to the beach and a hotel was built, adding to the Island's popularity.  The railroad spur was abandoned later, but the community continued to grow, especially during the Post World War II building boom.

On September 16, 1949, a group of 42 registered voters and freeholders, met for the first time in the Beach Park Restaurant upstairs hall, to incorporated a Town under the laws of the Florida Statute of 1941.  Today, the Pub Restaurant occupies that area.

After the approval of the majority that there should be no Ad Valorem Taxes or Assessments in the Town Charter, the name of the Town was to be Indian Rocks Beach South Shore.

In August 1951, 150 feet of Gulf Boulevard was purchased, a site for the present Municipal Building, whose contracts were let in October 1953.  The building was finished October 1954 and the mortgage was paid off in full in the fall of 1955.

On July 24, 1973, a special referendum was held by the Town as to the citizens' desires to change the name of the Town from Town of Indian Rocks Beach South Shore to Indian Shores.  The special referendum results were in favor of changing the name.  On August 14, 1973, the name of the Town was officially changed by Ordinance No. 82 and the name Indian Shores created.  Members of Town Council at this historic occasion were:  Mayor Lambertus Seynders; Vice Mayor Howeard E. Mann; James A. Roesler; William J. Coppenhaver; Ruth E. Paulson; Gordon E. Hall; Rollin R. Savage;  Samuel L. Clark;  and Robert M. Quin, Council Members.

Today, Indian Shores is a thriving Barrier Island Beach Community with over 1,800 permanent residences, and 2,600 domiciles.  The taxable value of the homes and businesses in our 2.6 mile long Town reached $737 million. During the winter months, the population swells to over 6,000 people at any given time. The Town has completed numerous capital improvement projects consisting of undergrounding of utilities, road improvement with bicycle lanes and pedestrian walkways, a new four-story Municipal Center, and a new park pavilion and playground.  It is presently involved in a new branding initiative, which will involve replacement of signs, bus shelter decals and an interactive monument dedicated to our indigenous people, and a Gulf Boulevard planting initiative to beautify the roadway with lush, Florida friendly landscaping.

Indian Shores is now a beautiful place to live and work and our citizens have rallied around the Town's beautification efforts with major upgrades to their private property adjacent to Gulf Boulevard.  We fully believe that we now totally live up to our long used Town Motto of "Indian Shores - A Great Place to Live."

In 2009, the Town of Indian Shores celebrated its 60th Anniversary of signing of the Charter establishing it as an incorporated municipality.  That year was recognized with a series of special social and political events, including a well attended early year gala, the "Read and Feed" events sponsored by the Town Library, and a Charter Re-Signing Ceremony on September 24th at the original signing location.  There was also a Hawaiian Luau in October, sponsored by the Indian Shores Property Owners Association, our Women's Club and the Town Council.  The highlight of the year, a 60th Anniversary Ball, held on November 7th, capped off the celebration year.