A red tide is a higher-than-normal concentration of a microscopic alga (plant-like organisms). In Florida, the species that causes most red tides is Karenia brevis. 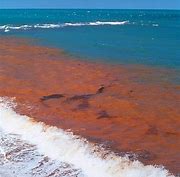 This organism produces a toxin that can affect the central nervous system of fish. At high concentrations (called a bloom), the organisms may discolor the water. However, red tides are not always red. They can appear greenish, brownish and even purple in color. Or, the water can remain its normal color.

The Florida Fish & Wildlife Conservation Commission (FWC), Pinellas County and other local agencies are monitoring the bloom but cannot predict how long it will last.

The Florida Department of Health in Pinellas County (DOH-Pinellas) is notifying the public of a Red Tide bloom along Pinellas coastal beaches. Some people may have mild and short-lived respiratory symptoms such as eye, nose, and throat irritation similar to cold symptoms. Some individuals with breathing problems such as asthma might experience more severe symptoms. Usually symptoms go away when a person leaves the area or goes indoors.

Health officials recommend that people experiencing these symptoms stay away from beach areas or go into an air-conditioned space. If symptoms do not subside, please contact your health care provider for evaluation.

Florida Poison Control Centers have a toll-free 24/7 Hotline for reporting of illnesses, including health effects from exposure to red tide at 1-888-232-8635.

For information about Red Tide and links to other resources, visit http://pinellas.floridahealth.gov/programs-and-services/environmental-health/water-programs/red-tide/index.html.

What is Red Tide?
A red tide, or harmful algal bloom, is a higher-than-normal concentration of a microscopic alga (plantlike organism). In Florida and the Gulf of Mexico, the species that causes most red tides is Karenia brevis, often abbreviated as K. brevis or “Florida red tide.”  At high enough concentrations, Florida red tide can discolor water a red or brown hue.

Can we predict where a red tide will occur?
Although the occurrence of a red tide cannot be predicted, scientists can forecast its movement using wind and water current data once a bloom is located. Scientists also monitor the concentration of the red tide organism by collecting water samples routinely and in response to blooms. Red tide movement and concentration are important because the effects of a red tide, such as dead fish and human respiratory irritation, depend on these factors. The information provided by forecasting and monitoring allows people to make informed decisions regarding their beach-going activities.

Is it safe to swim during a Florida red tide?
Swimming is safe for most people. However, the Florida red tide can cause some people to suffer skin irritation and burning eyes. People with respiratory illness may also experience respiratory irritation in the water. Use common sense. If you are particularly susceptible to irritation from plant products, avoid an area with a red tide bloom. If you experience irritation, get out of the water and thoroughly wash off. Do not swim among dead fish because they can be associated with harmful bacteria.

Is it OK to eat recreationally harvested shellfish during a red tide?
Recreational harvesting of bivalve molluscs such as hard clams, oysters and mussels from conditionally approved or approved shellfish harvesting areas is banned during red tide closures; these organisms may not legally be harvested and, therefore, should not be eaten during any closure of a shellfish harvesting area. To determine whether or not harvesting of shellfish is permitted in an area, visit the Florida Department of Agriculture and Consumer Services, Division of Aquaculture website. Edible parts of other animals commonly referred to as shellfish (crabs, shrimp and lobsters) are not affected by the red tide organism and can be eaten. Do not eat the tomalley (green stuff, hepatopancreas). During scallop season, locally harvested scallops from open scallop harvesting areas are also safe to eat as long as you eat only the muscle of the scallop and not the whole animal.

Is it OK to eat local finfish during a red tide?
Yes, it is safe to eat local finfish as long as the fish are filleted before eaten. Although toxins may accumulate in the guts of fish, these areas are disposed of when the fish are filleted. However, it is never a good idea to eat dead or distressed animals, especially in a red tide area, because the reason for the animal's strange behavior or death cannot be absolutely known.

How can the Florida red tide affect my pets?
Just like people, pets may be affected by the Florida red tide. If you live close to the beach, consider bringing outdoor pets inside during a bloom to prevent respiratory irritation. If you are at the beach with your pets, do not allow them to play with dead fish or foam that may accumulate on the beach during or after a red tide. If your pet eats dead fish, it may get sick. If your pet swims in the red tide, wash it as soon as possible. Most dogs lick themselves after swimming and will consume any toxins on their fur.

If you know someone who would like to receive the e-Lert newsletter, have them visit www.pinellascounty.org/emergency/subscribe.htm